" Jordanian artist Mona Saudi's career path is something of an epic journey. The 73-year-old artist was born in Amman, Jordan, in a conservative family in which women were prevented from pursuing higher education. She ran away from home at age 16 and took a cab to Beirut, which then was a consmopolitan capital city and the centre of the Arab World's artistic scene, and in Beirut she had her first exhibit at Cafe de la Presse. From Beirut, she moved to Paris and the Ecole Nationale Superieure des Beaux Arts. It was in Paris that she first started using stone for her scultpures - a medium that she would end up utilizing for the ensuing decades. She is also well know for her drawings inspired by poetry. " 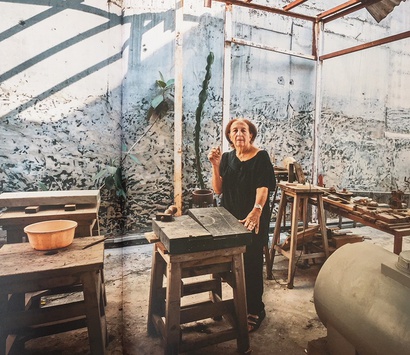