Nadia Kaabi-Linke in The Telegraph

The Telegraph reviews But A Storm is Blowing from Paradise, on view at the Solomon R. Guggenheim in New York until 5 October, 2016.

Caroline Roux spoke with Curator Sara Raza about the exhibition's very particular curatorial approach, “I had a mandate,” says Raza, “and that was to gather work for a permanent collection. Work that will mean something in 30 years or 100.”

Works on view include "installations, many of an architectural nature,[that] tell stories of movement, loss and cultural larceny," Roux explains. "Of course, the exhibition is particularly timely. It was conceived in the light of the Arab Spring, but subsequent events in Syria, Turkey and elsewhere in the Middle East make it more relevant day by day," she continues.

Roux feautures Nadia Kaabi-Linke's Flying Carpets, describing the work as a "spectacular cage-like construction of steel, aluminium and thread takes its coordinates from the escape routes followed by the street  vendors of Venice, mostly of African or Arabic origin, as they gather up their blankets and fake handbags when the authorities appear."  Read more. 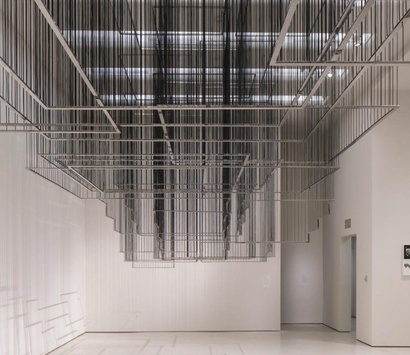