The Hosfelt Gallery in San Francisco will present Breach in the Silence, an exhibit featuring new paintings by Driss Ouadahi, it will run from  July 16 until August 20, 2016. The paintings include renderings of chain-link fences, that were influenced by the artist's interactions with Syrian and Iraqi refugees who have re-settled in Germany.

Ouadahi asks the viewer to consider the political and psychological aspects of boundaries and the relationship they have to ethnicity and social class, through representations of three types of architectural imagery:  cityscapes of glittering modernist high-rises, claustrophobic depictions of subway tunnels and photo-realistically rendered pictures of chain link fences.   Read More. 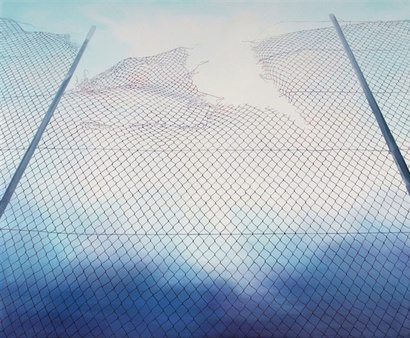